Usually, except that the tripping fault caused by the external power supply is not the cause of the air compressor itself and does not need to be dealt with, other "tripping" faults caused by the tripping of the overload protector must be treated with caution. The consequences of forced operation may cause the unit to be scrapped.
There are many reasons for jumping, the most common is high temperature "tripping", especially in summer with higher temperatures. To deal with high temperature trips, one must start with lowering the operating temperature of the unit. I have already said a lot of articles about the handling of high-temperature tripping. At the end of the article, I will only briefly state it and will not repeat it. 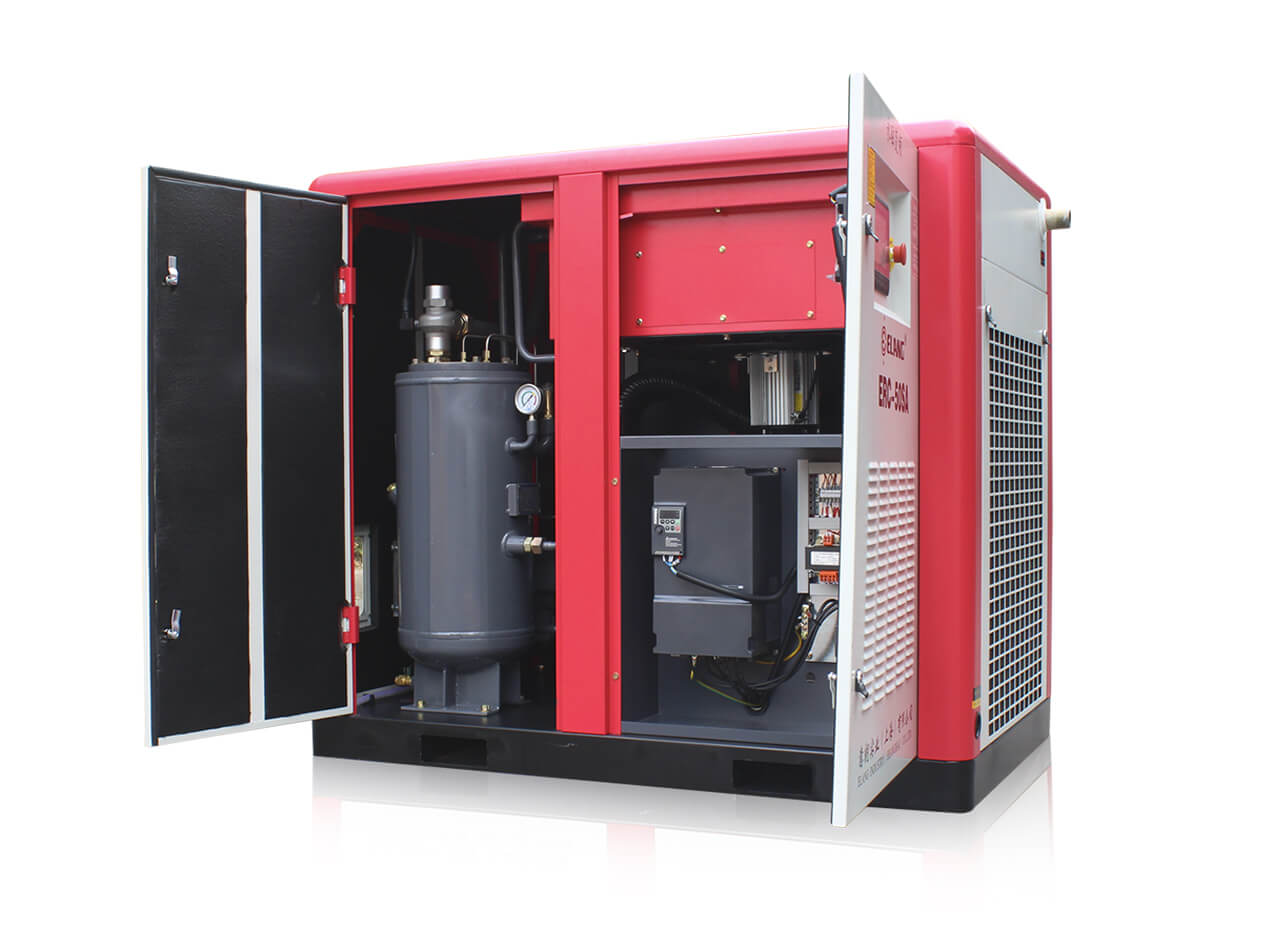 This article mainly talks about other uncommon reasons, which are difficult to repair. Unfamiliar after-sales maintenance personnel will feel more "tricky" when encountering such problems. This article may help you clarify a little idea. The "removal method" can be adopted to eliminate the causes of failure one by one. 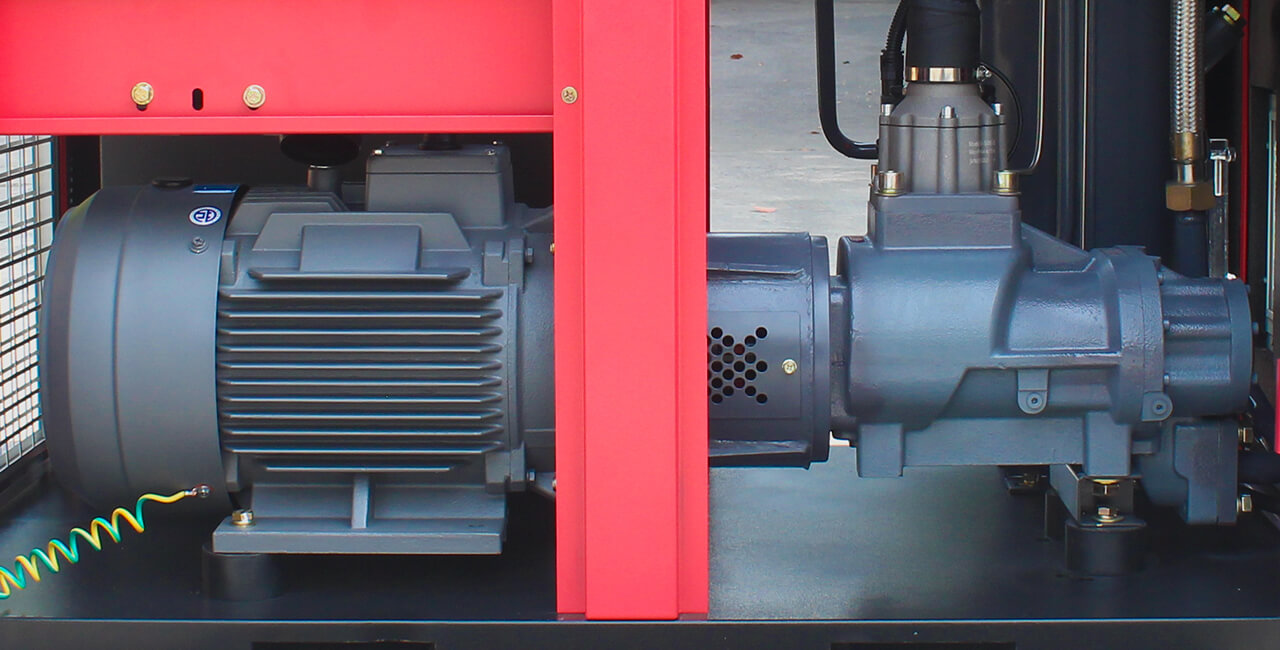 Excessive resistance of air end will cause the compressor start current to be too large, that is, the compressor is overloaded, causing the air switch to trip. There are three main situations that cause the resistance of air end to increase:
(1) The viscosity of lubricating oil is large. The temperature in the south varies greatly with the seasons. The ambient temperature in summer can be as high as about 40 ℃, and the minimum temperature in winter is as low as below zero. According to the characteristics of general lubricating oil's viscosity inversely proportional to temperature, the viscosity of lubricating oil in winter will increase significantly compared with summer.
Especially after the winter shutdown, due to the presence of moisture in the lubricating oil environment of the equipment, the temperature is too low to cause the water to freeze and block the circulation of the oil circuit. Therefore, when the air compressor is started for the first time in winter, it is particularly emphasized that it cannot be started directly, and it needs to be moved several times to drive the viscous lubricating oil to complete the circulation process as soon as possible.
(2) For single screw compressors, the screw and star wheel in the air end are coking. The work of the single-screw compressor is mainly completed by the engagement of the screw and the star wheel. The gap between the screw and the star wheel determines the work efficiency of the compressor. If the gap is too large, part of the gas will leak from the gap, and the compressor will have low work efficiency; if the gap is too small, the resistance between the star wheel and the screw will be large, the load will be large, and the motor will consume more energy. Coking in the air end can cause the gap between the star wheel and the screw to decrease, the frictional resistance in meshing is large, and the current of the compressor increases.
(3) The amount of lubricating oil in the air end is too much. The oil cut-off valve at the outlet of the air end failed. After the compressor was stopped, the oil shut-off valve was not closed in time, and a large amount of lubricating oil was pressed into the air end, causing the starting resistance to be too large during the starting process, and the increase of the current caused the overload protection to tripping. 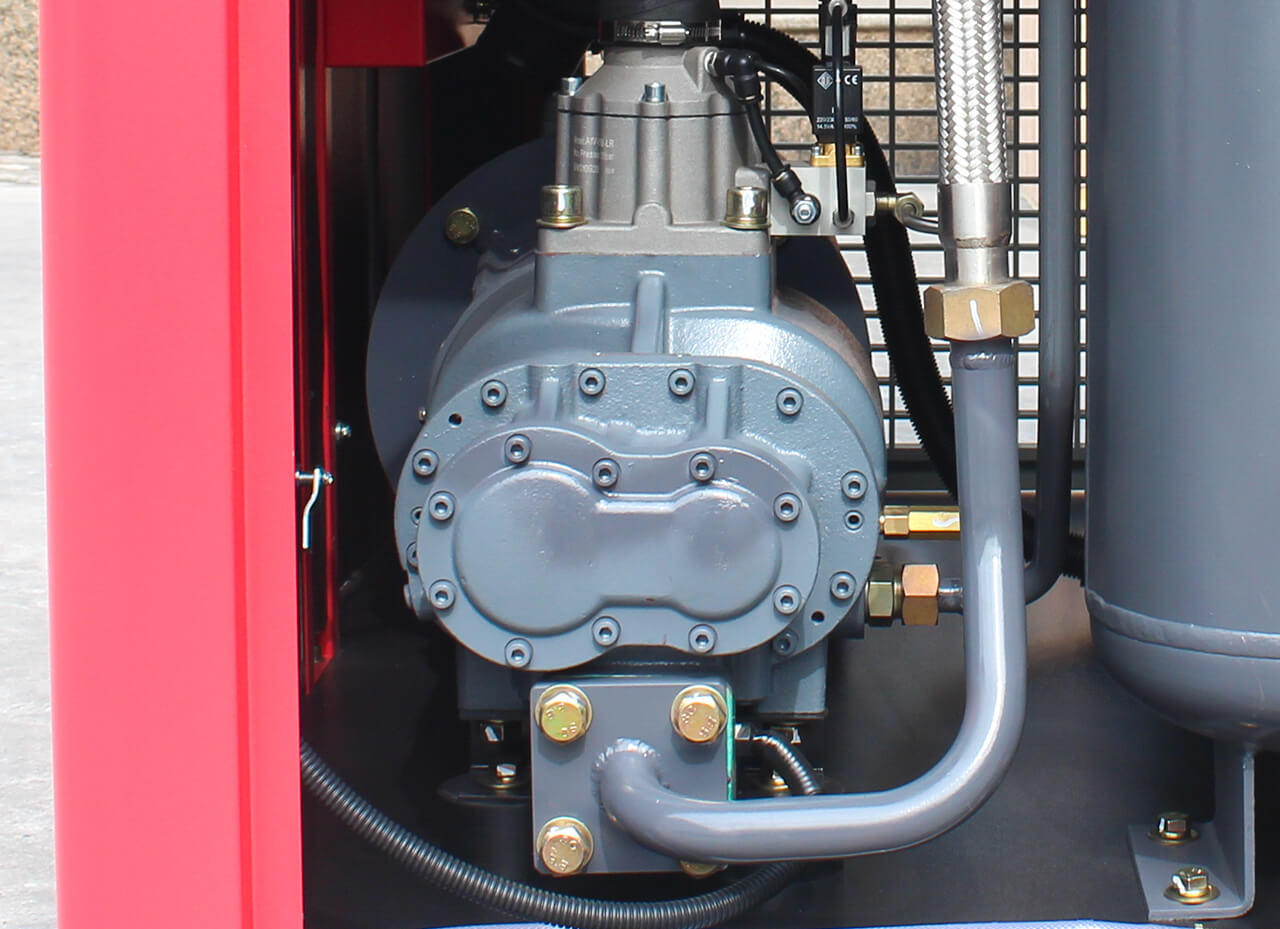 (1) Manual cranking is the most basic detection method for the connection and free rotation of compressor power components, transmission components and linkage components. Through the manual cranking of the compressor before starting, it is checked whether the air end and the motor can rotate freely, and based on the past cranking experience, it is judged whether the resistance to rotation increases or not.
(2) Oil coking in the air end is a common phenomenon in screw compressors when the oil quality is poor or the temperature is high. Due to the coking of the air end, the gap between the screws or between the screw and the star becomes smaller, and it is rotating In the process, the frictional resistance increases, the load of the unit increases, and the current increases. In severe cases, the screw and the star wheel are glued together by oil coke, and the unit cannot rotate freely.
(3)The function of the oil cut-off valve on the oil injection pipe of the air end is to cut off the oil injection pipe in time when the unit is shut down to prevent a large amount of lubricating oil from being pressed into the air end due to the residual pressure in the oil and gas barrel, causing excessive lubrication in the air end. Therefore, too much lubricating oil in the air end after shutdown is also one of the reasons for the large starting current of the compressor. The most direct way to solve the problem of excessive lubricating oil in the air end is to open the end cover of the machine head, release part of the lubricating oil in the air end, and repair or replace the oil cut-off valve.

Many users use a 380V motor, which uses the star-delta conversion step-down starting method to start. In the early stage, it runs in star mode, and turns to triangle mode after 2~3s of start up. If the star-delta switch fails, normal star-delta conversion cannot be performed. The star current is many times higher than the delta operating current, and the protector delay time expires, which will naturally cause the compressor to trip. In addition, when the air switch is in use, due to vibration and other reasons, the set start time of the air switch becomes shorter, which may also cause instantaneous tripping. 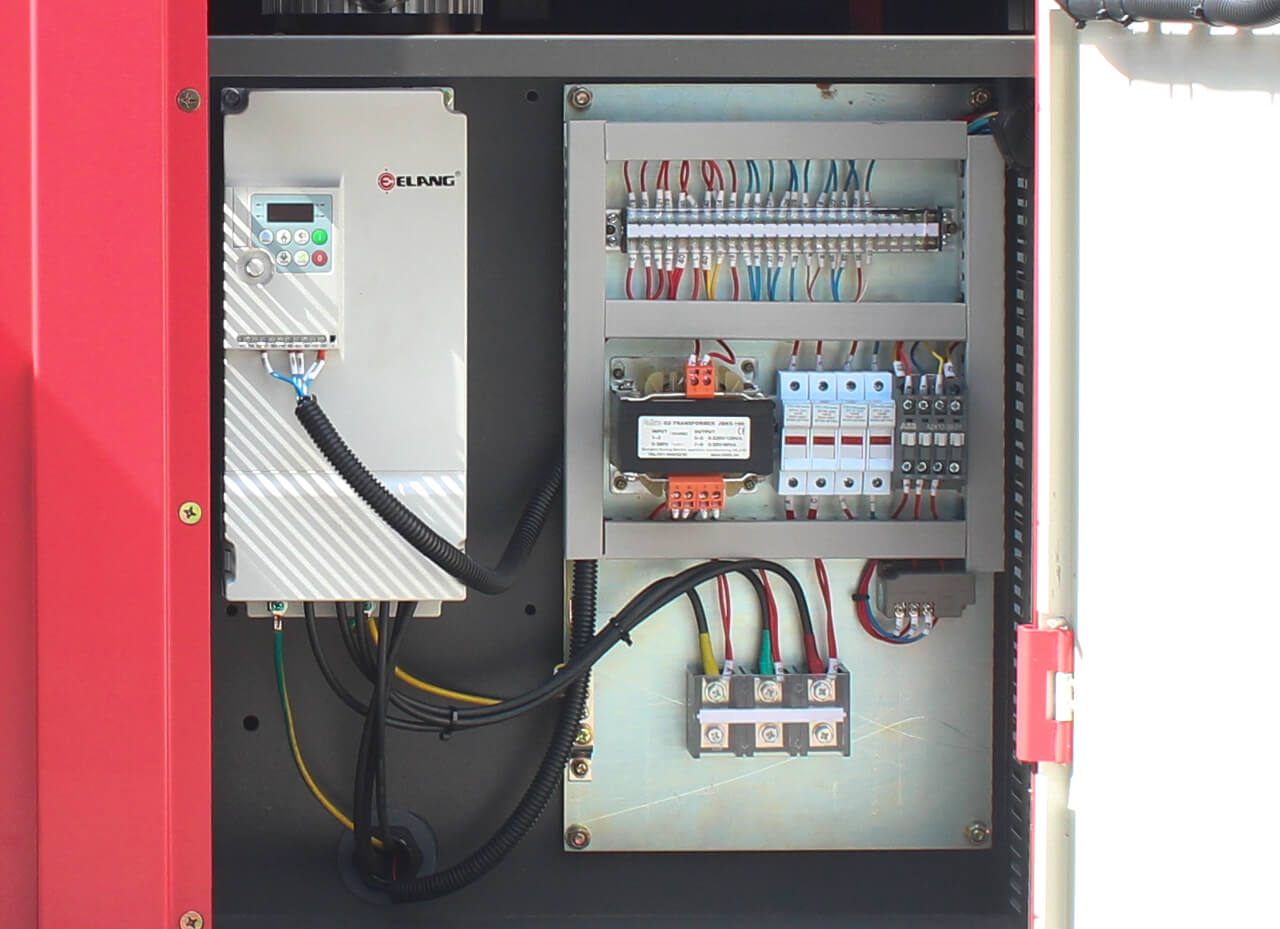 The most direct and effective way to determine whether it is an electrical failure or a mechanical failure is to separate the motor from the air end, that is, to remove the coupling or belt connected to the headline. Manually turn the main compressor and motor to eliminate mechanical problems.
If it is caused by the mechanical causes of the compressor air end and the motor, the motor can run normally when the load is thrown away; otherwise, it is a problem with the electrical part.
But please note that some of the faults are caused by the motor itself. It feels normal when the motor is manually operated, and the motor behaves normally when it starts running without load. Once it is loaded, the problem of overload and trip occurs. This problem is generally the motor bearing or the motor Caused by the misalignment of the connection with the compressor host.
In actual production and operation, there is another reason for machine tripping although it is relatively rare, but it also exists. Electronic control system failures, such as false alarms of temperature probes, over-temperature trips and alarms caused by malfunctions of temperature relays and circuit breakers in high-temperature environments. 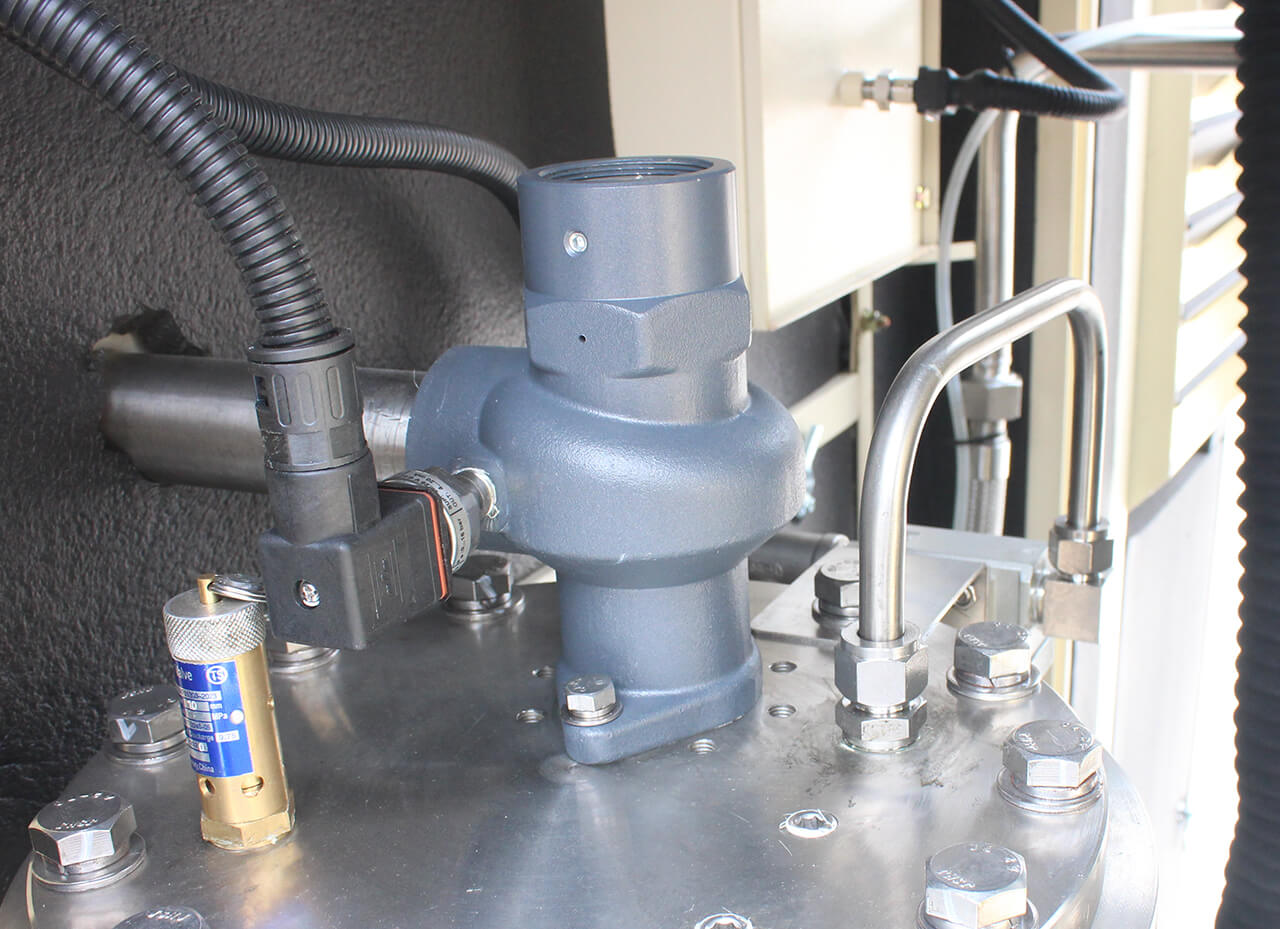 The lubricating and cooling oil has failed. The lubricating oil of the air compressor not only lubricates the moving parts, such as the high-speed rotating rotor and sliding vane. Moreover, a large amount of heat energy is generated during the cooling and compression process, such as friction heat generated by the relatively high-speed movement of the friction pair and heat energy generated when the air is compressed.
The air to be compressed contains a large amount of dust, water and corrosive hydrogen fluoride and sulfur dioxide gas, which has a greater impact on the lubricating oil and makes the lubricating oil useless. After the lubricating oil fails, no oil film is formed on the relative motion pair, the heat generated by the relative motion friction increases, and the cooling effect is reduced, making the temperature rise of the air compressor excessively high during operation.
In addition, the characteristics of high temperature tripping caused by failures of the air cooler, water cooler, and three filters are more obvious, so I will not repeat them.
In short, there are many reasons for compressor tripping, and there are many causes. Only when we have a more comprehensive understanding of compressor operating principles and component functions, can we prevent compressor tripping failures before they occur.